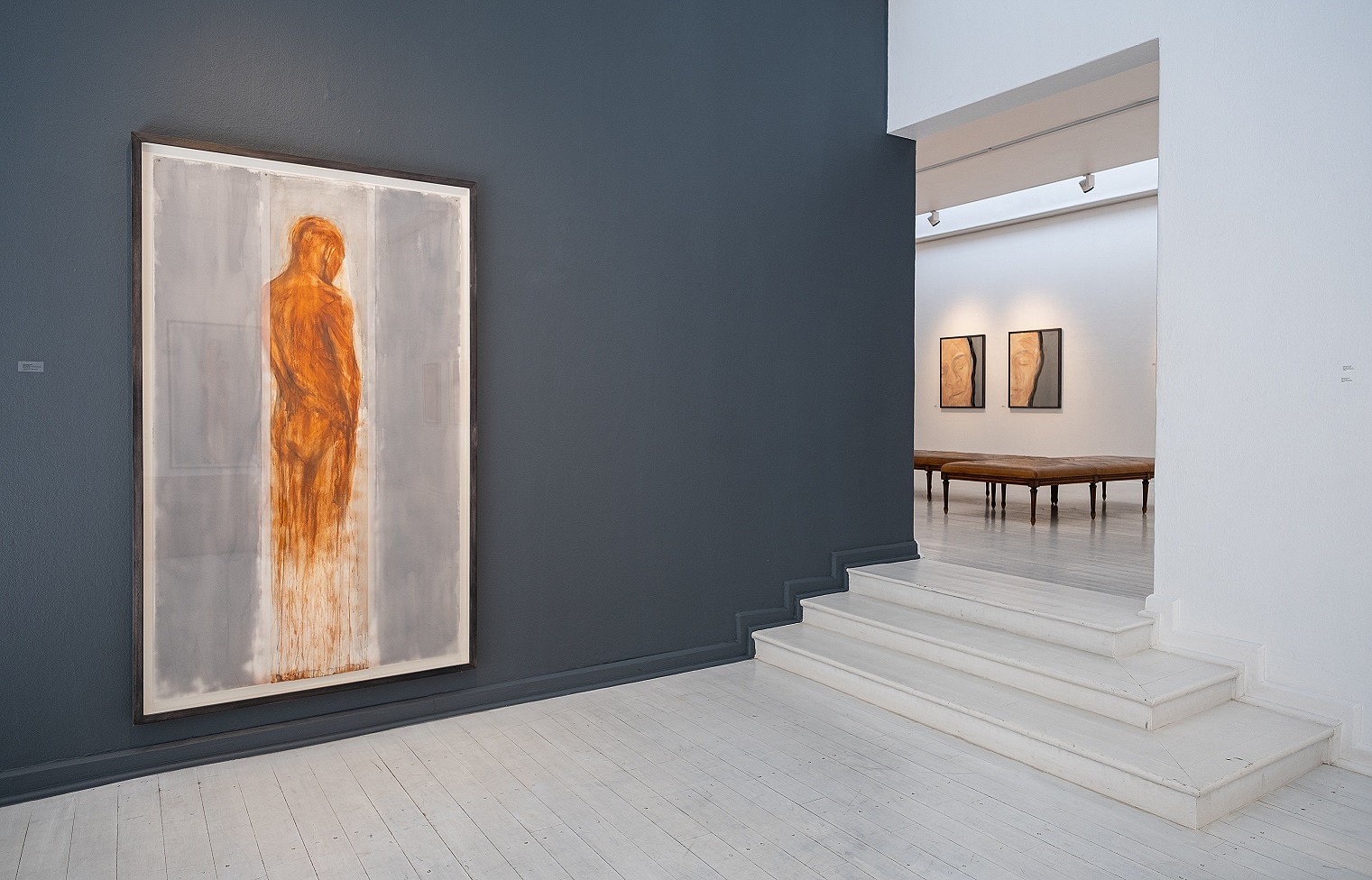 Earth, Light and Water will be open to view by appointment from Thursday 24 June until 17 July 2021.

Please call us on 011 788 4805 or email us at reception@everard.co.za to book your visit, our gallery hours are below:

We sincerely apologise for any inconvenience caused, please do not hesitate to contact us for any further queries.

We look forward to welcoming you to the gallery.

“Live in each season as it passes; breathe the air, drink the drink, taste the fruit, and resign yourself to the influence of the earth.” ––Henry David Thoreau, from Walden

In around 1995, Thea Soggot began engaging with earth as something other than the steadfast and sturdy ground beneath her feet. Until that point Soggot had, for the most part, chosen to work almost exclusively with charcoal and graphite. Seeking a different kind of subtlety from the contrast that black, grey and white had to offer her, she began to experiment with earth as a drawing and painting medium. Starting simply with soil from her own garden, and collecting earth from various other places around her which she frequented, the process at first yielded little success, the earth sitting like a crust on the surface of the paper, a casing of her marks that did not penetrate the substrate, and therefore leaving not much after time than a few dusty traces.

During this time of experimentation, a visit to the Retiefskloof region of the Magaliesberg yielded a serendipitous discovery. Soggot was attracted to the rich, ruddy hue of the earth, and so she collected some of it and brought it back to her studio, where she found that the earth, when mixed with water, made a most adequate drawing and painting medium. The deep reddish brown colour of this particular soil penetrated the paper in a lasting way, creating marks of intensity and longevity. From this finding, Soggot began subsuming the landscape into her practice, using the earth itself to make images – a practice that has yielded 26 years’ worth of work.

The striking colour of the earth found in the Magaliesberg region, which is now the mainstay of Soggot’s work, in various tones and degrees of burnt sienna, owes its intensity to a pronounced concentration of iron oxide. This also makes the pigment light-fast and, therefore, permanent. In order to work with it, Soggot creates a slurry of earth and water and uses this as a kind of paint, forming her images with the earth-paint in expansive strokes on sturdy Arches paper. Alternatively, Soggot prepares the surface of the paper with a wash of the slurry, so that the whole surface is covered with the pigment, which enables her then to work reductively into the textured, undulating field of colour. Washing away the pigment with a watery brush to draw out the image, Soggot is obliged to approach these reductive works almost like sculptures, whittling the images from the umber ground with her brush, allowing the images to emerge evocatively. In studio, both methods are useful – the first being most suited to larger works and those created in situ of the studio, while the second method of reductive washing away lends itself to a more intimate and abstracted treatment of subject matter, and has also served as a practical solution for making work on the move during her numerous residencies at the Cité internationale des arts in Paris.

The marks that are made with this elemental medium are landscapes in and of themselves, as if echoing their own origins. Looking closely at the painted surface reveals layers and rivulets of pigment, topographical in the ways that the paint has trickled and settled along the surface of the paper. Soggot has little control over the formation of these terrains within each work, and has embraced the uncertainty of this, granting the medium a life of its own. In this way, the earth as medium also plays its part in creation, alongside the artist. The medium itself also – and always – has properties that complicate the process of creation, involving more than simply the artist, the material and the resulting image. There are metaphysical implications that come with each choice – the choice to use charcoal instead of graphite, earth instead of oil – that invite a particular treatment of the subject matter, both formally and intuitively. Each material contains all the inferences of its origins.

The works presented on this exhibition include both monumental drawings and smaller, more delicate tableaus, with a primary focus on the human form. The body, in Soggot’s work, has always been a powerful vehicle for expressing aspects and explorations of the human experience: the body as the site of sensation, as the container of emotion, as the most powerful means through which we form relationships with others. The use of earth from a region so close to the Cradle of Humankind, where a wealth of early hominid fossils have been found, adds to these explorations a sense of the primordial human experience – the human individual emerging and coming to terms with the implications of its sentience, and its consciousness.

The larger of the works feature immense nude figures that seem to rise out of the earth with which they have been created, as rooted as trees. These figures appear as anthropomorphic rock formations, creatures that resonate with the rocky landscape from which they are originally derived. Despite their monumental scale, these figures contain a vulnerability that complicates their initial appearance as imposing or daunting sculptural beings – their humanness is contained in their tenderness. In these large, vertical works, drafting film placed on either side of the composition contains the figure, creating a window through which it can be viewed. This is a window onto the elemental power of the human body, but also a view of our fragility and mortality – we rise up from the earth, and we return to it.

As a counterpoint to these large, vertical figures, a series of faces drawn with eyes closed, sometimes with lips slightly parted, and obscured entirely by drafting film, allude to a cycle completed. In these drawings, the detail and topographical quality of each face and the unpredictable marks made by the earth medium are entirely hidden. Only the shadows and highlights reveal the form of the face, like the most notable moments that remain in our memory, while the more nuanced details of our histories recede into the passage of time. Intimacy with these figures is precluded by the drafting film – we cannot really know them. A dark line on top of the drafting film contains each peaceful face, an inverse of the white chalk outlines of a homicide investigation. For the viewer, this outline confirms in a most poignant way that these figures are unreachable. However, it also serves as a reminder that we look upon them through the veil of our own transience.

Alongside the large figures and veiled faces, a number of smaller works provide a different perspective, and it is among these more intimate works that the foundational series in this presentation, titled Back, can be found. The works in this series depict a figure viewed from the back, curled into a foetal position. The origin of this image is a sculpture – Petite Fille Pleurant by Paul-Albert Bartholomé – of a young girl weeping, the sadness rendered palpable in her small body. Soggot first encountered a version of this sculpture on display at the Musée d’Orsay in Paris in 2009. She was stirred by the incalculable emotion contained in the sculpted body of this small child, and drew a quick sketch of the figure. Soggot did not note down the details of the sculpture – the artist, the title – but her experience of it stayed with her. When she returned to Paris ten years later, she undertook to find the sculpture again, eventually locating a marble version of the Petite Fille Pleurant at the Petit Palais museum of art, and set out to capture a more honed drawing of it.

Soggot has returned countless times to the figure in her studio. As an image that resonated deeply, she has created it again and again, discovering something new, revealing something different each time. In Bartholomé’s sculpture, the child’s mourning is so poignant and recognisable that she stands as an icon of mourning, so universal in her implications that she has the capacity to touch everyone, anyone, who has ever experienced grief. She stands for all the moments lost, the loves lost, the words spoken or unspoken, all the things of which we have had to let go, the rifts and the emptiness. However, in Soggot’s work, the figure is abstracted; each redolent figure emerges (or, perhaps, recedes) from the ground in the centre of the composition and the rawness of her grief is tempered.

However, the impact still remains, through repetition which accentuates slight changes, inviting the viewer to spend considered time with this figure. The figure is turned away from us, concealed from us in sleep or in deep contemplation. A small number of works that stand alongside the Back series break away from depictions of the human form – some containing text, and others depicting bridges captured while travelling through Paris. The bridges appear as traces of architecture, as if seen through a veil or emerging through a thick fog, like a vision from long ago. In the text pieces, words drift across un-worked earth ground – most specifically, “The disturbing silence, the disturbing beauty of March 2020” – offering an invitation to ponder both the losses and gains we have, as a global community, seen as a result of the unprecedented health emergency that has unfolded over the last 18 months or so. The Covid-19 pandemic is a sobering reminder of the impact of severely disrupted ecological balance, but it has also contained kernels of hope for the future. Subliminally and elegantly aligning subject matter with medium, Soggot draws on, draws with, and offers up through her work insights not only into our relationship with ourselves and each other, as physical and intricately complex earthly beings, but also into our troubled relationship with the earth itself, the body that ultimately sustains us. - Jacqueline Flint (2021)