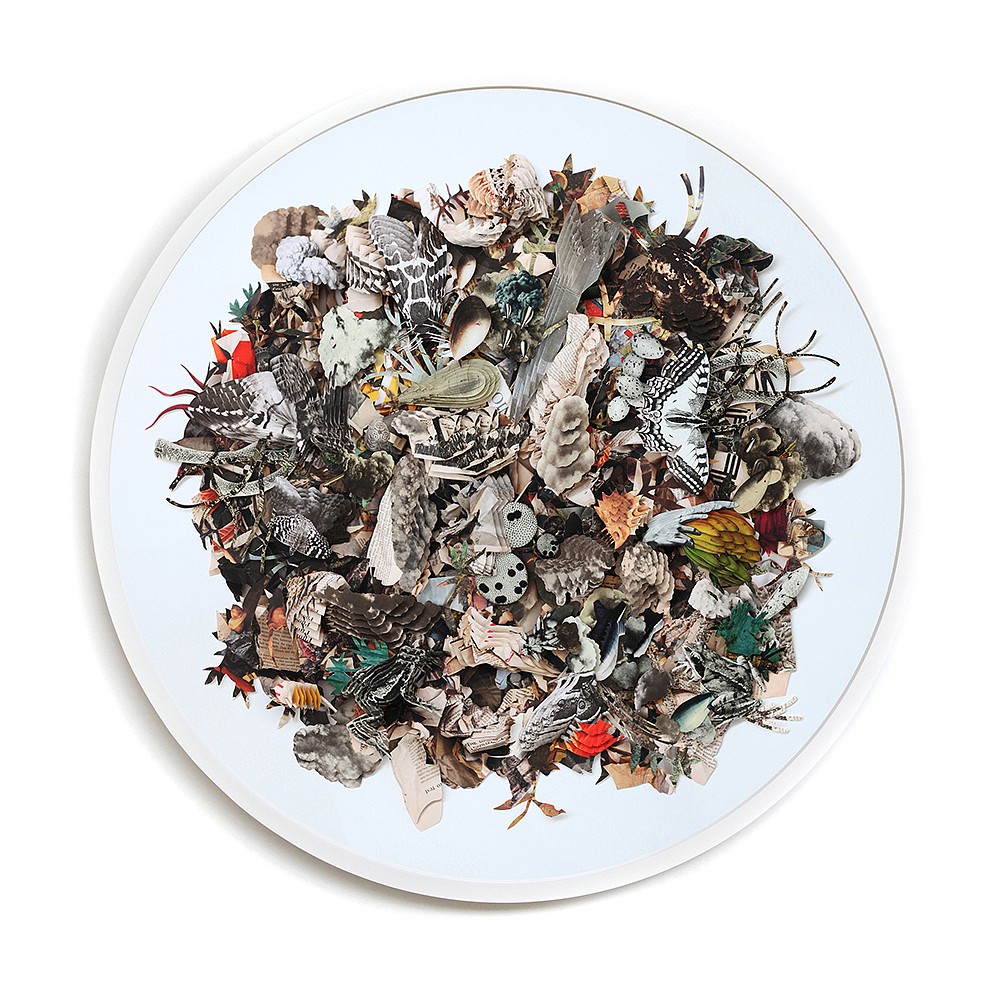 
“Like the human psyche, modern society is dialectical – it has both a ‘dark’ and a ‘light’ side that continuously interpenetrate – and the very neutrality and ambivalence of reason (so central to Western development) facilitates the ability of society to manifest different shades of light and dark” ( from Dialectic of Enlightenment, written by Max Horkheimer and Theodor W. Adorno).
Sigmund Freud’s seminal work Civilization and its Discontents (1930), introduced Eros and Thanatos, which he believed to be responsible for the disquiet, unhappiness, and anxiety humans suffer. These terms refer to the constant struggle between the life drive and the drive for destruction which he held to be at the centre of the development of civilization and the struggle for existence.
In Eros / Thanatos, Barbara Wildenboer draws from her own dreams, anxieties and personal narratives and intuitively connects inner and outer worlds, present, past and future. She uses the medium of collage to create a contemporary Vanitas within the context of the Anthropocene era. The body of collage works are filled with both personal and mythological references. There is a strong emphasis on narrative and how classical and contemporary stories frame our understanding of the relationship between the technologies which are meant to help us and the world that we inhabit.
From the viewpoint of evolutionary ecology, our universe is filled with creative and destructive energies. Nuclear energy, genetic engineering and developing nanotechnologies offer opportunities for growth and expansion but could equally result in cataclysmic outcomes.
Using media images and information selected from various sources, such as science and natural history books, old war magazines and journals of art and culture, Wildenboer constructs alternate realities that intimate an ostensibly apocalyptic future — that of the post-Anthropocene — but one that also suggests adaptation and the forming of new relationships, where all is not lost and humankind ekes out a tentative balance with both each other and with the natural world. The collages are musings on modern human life and the fragility of the symbiotic relationship between humankind and our ecology; a tenuous relationship that is jeopardised by consumerism, wastefulness and a sense of disconnection with each other and with nature. The works also make reference to the Chthulucene as an alternative to the Anthropocene, describing a world in which there is a flattening of any hierarchy between species (after Pimoa Cthulhu, a species of spider). Delicate webs of non-hierarchical interconnection between species provide a counterpoint to a world where we could be devoured by a gargantuan horror of our own making.
Because “it matters what stories make worlds, what worlds make stories” (from Staying with the Trouble- Making Kin in the Chthulucene, Donna Haraway (2016).


Barbara Wildenboer uses a combination of analogue and digital processes to create work that mostly consists of collage, photo and paper-construction and digitally animated photographic sculpture. Her main focus is on environmental aesthetics and ecopsychology.

Wildenboer has also been working on an ongoing project entitled Library of the Infinitesimally Small and Unimaginable Large since 2011. It was inspired by a short story by the Argentinian writer Jorge Luis Borges titled The Library of Babel and uses the library as a metaphor for the universe.  Barbara Wildenboer lives and works in Cape Town, South Africa where she is represented by the Everard Read Gallery. She completed a BA(Ed) with majors in English literature, Psychology and Pedagogics at the University of Pretoria in 1996 followed by a Bachelor of Visual Arts from UNISA. In 2007 she obtained a Masters in Fine Art (with distinction) from the Michaelis School of Art at the University of Cape Town in South Africa. The title of her Master’s thesis was Present Absence / Absent Presence and the research was concerned with aspects of melancholy, loss and longing as is embodied by the photographic medium. From 2009-2016 Wildenboer worked as the head of the Photography Department at the Cityvarsity College of Creative Arts.  In 2011 she was nominated and subsequently selected as one of the top 20 finalists for the Sovereign African Arts Award for which she received the Public Choice Prize. She has been awarded several international residencies such as the Unesco-Aschberg residency (Jordan, 2006), the Al Mahatta residency (Palestine, 2009) and the Red De Residencias Artisticas Local (Colombia, 2011), the Rimbun Dahan artist residency (Malaysia, 2013) and L’Atelier Sur Seine (France, 2017) and the Hannacc arts residency (Spain, 2018).