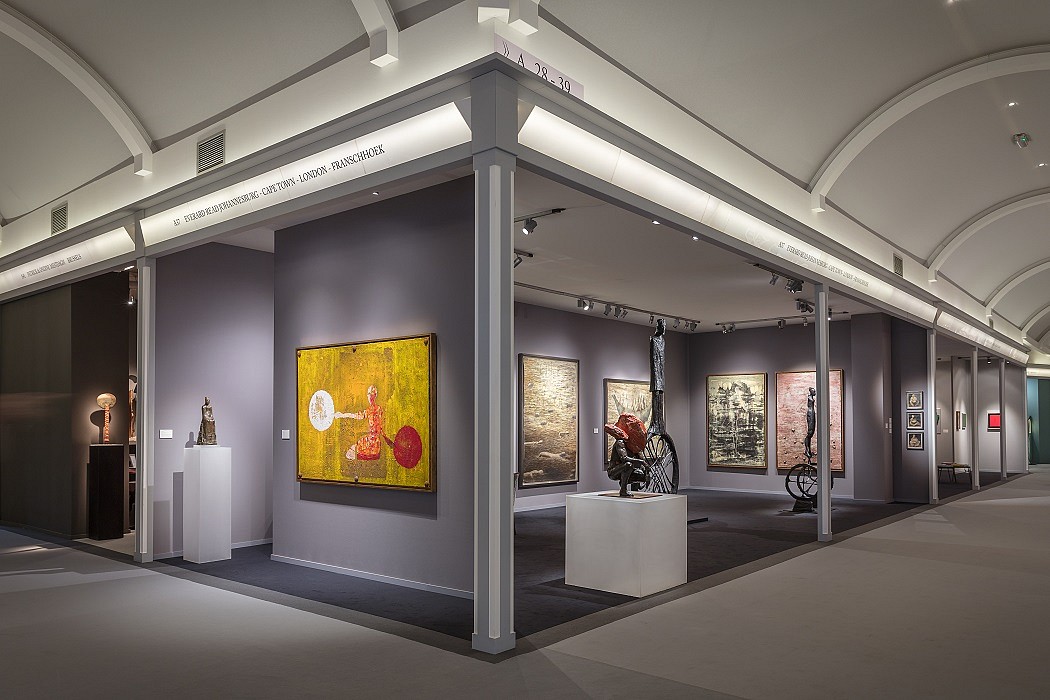 Everard Read makes its debut at Masterpiece London with a presentation of four artists: Deborah Bell,

For much of Deborah Bell’s working life as an artist, she has been on a quest to connect with herself, with others, with the mysterious forces that are everywhere inside and around her. Increasingly, her art-making has been part of a very personal, spiritual journey. She makes art in order to explore, to enter into the unknown, to surrender control and to alter herself.

Bell makes works with the intention to transform. She likens her work to “a form of alchemy, an ancient process of transmutation of base metals into gold in search of the meaning of life. Indeed, she feels that each new image she creates is a transformation, a melting in the crucible which results in a personal transformation. This mystical relationship is fundamental to understanding Bell’s creative process and how she thinks about her works as being imbued with spiritual forces which emanate from deep within her.”*

Bell is fascinated by ancient civilisations and their excavated artefacts and her work incorporates powerful, totemic images and layered visual, symbolic and iconographic references of past and present worlds. In her iconography, the artist draws from a range of cultures - African, Chinese, Egyptian, Greek, early Christian, European - and a range of

psychologies and philosophies, particularly the Buddhist preoccupation with stillness and the shedding of attachment and the ego.

In Bell’s recent work, human figures have embodied the seeker on a journey and often accompanied by lions, hounds, wolves, horses and totemic modes of transport such as boats and chariots. However, her newest work, presented in this exhibition, is characterised by a sense of coming home, a greater emphasis on the human body being on this earth. There is an increased sense of acceptance of our materiality; a surrendering to who we are, and the suggestion of an end to the constant quest for transcendence.

Like Bell, Guy Ferrrer’s work is deeply concerned with the numinous, with spirituality and the transience of life. His practice is centred on his ongoing exploration of the duality of life and the universe, using his artistic process to search for meaning and share his revelations with others. Ferrer speaks of his art as a bridge to knowledge, to understanding - of other peoples and of higher realms. This belief has fuelled the creation of his powerful artworks that resonate with audiences across countries and cultures.

Like Bell, Ferrer has a profound belief in art’s power to transform. Indeed, this was the driving force behind his landmark sculpture, TOLERANCE, made in response the September 11 attacks as totems of reconciliation and hope.

Ferrer's relentless commitment to being in the studio every day comes from a deep, spiritual need to make art. The artist explains; “I work as a sculptor and painter in the way that others take to the road as nomads, without knowing exactly where they are going but sure that the road is the right place for them and trusting in their destiny. I paint and sculpt paths to follow, to find meaning – in life and death, in fullness and emptiness, in light and shadow, in our precariousness, in our eternity.”

Known for his powerful, often monumental, sculptural works, Angus Taylor works with an extraordinary range of materials from his immediate environment such as Belfast granite, red jasper and the orange soil found in South Africa. As with Sit (maquette), presented at Masterpiece, Taylor frequently eschews the ‘carvability’ of rock in favour of using its block-like potential to construct works that allude to human form, without describing it. Taylor describes the red jasper head as viscerally evoking “human corporeality: in sinew, tissue and flesh.” And he thinks of the kneeling figure as “the plinth for the carrier of thought and meaning: the stone.”

Taylor relishes working with challenging materials on a scale that many sculptors find intimidating. His craftsmanship coupled with his bold and ambitious approach, and his original use of materials, has resulted in landmark sculptures and monumental public and private commissions around the world. The inventiveness with which he tackles materials positions Taylor as a post-modern artist making reference to traditional crafting techniques but using them to create works that are unmistakably contemporary.

Nic Bladen is one of the finest botanical sculptors working today. With his pioneering technique of casting entire plants in bronze and sterling silver, Bladen celebrates the subtle and diverse beauty of the flora that grace his native Western Cape, South Africa. For Masterpiece, Bladen has made a unique cast of the king protea (protea cynaroides), - the majestic and distinctive national flower of his native South Africa. His second bronze for Masterpiece, also a member of the Protea family, is a Leucospermum branch preserved in bronze, effortlessly floating and suspended in time and place.

The extraordinary beauty of Bladen’s work is all the more poignant given the indications that his home is one of the globe’s regions most affected by climate change.

Everard Read’s presentation at Masterpiece continues until 3 July 2019, while its London gallery presents a concurrent exhibition: Southern Aspect – A Group Exhibition, showcasing the work of some 20 South African artists.

Everard Read was established in South Africa in 1913, making it Africa’s oldest commercial gallery. The gallery’s primary focus is on modern and contemporary art from southern Africa. Although contemporary artists from the UK, Europe and the USA are also exhibited, Everard Read retains at its core, an impressive stable of South African artists.

Everard Read has galleries in Johannesburg, Cape Town, London and Franschhoek. Each gallery presents a year-round programme of solo and group exhibitions, advise both public and private collectors around the world and have an ongoing commitment to nurturing South African talent.

The gallery is open weekdays, 10am – 6pm and Saturdays, 12pm – 4pm. www.everardlondon.com

Deborah Bell (b. 1957, Johannesburg) is one of South Africa’s most celebrated contemporary artists. She works in a range of media on canvas and paper, produces dry point etchings and large-scale bronzes. Bell has collaborated on various historically important projects with contemporaries such as William Kentridge and Robert Hodgins. Her earlier more political work has given way to a broader, deeper investigation into the border been mortality and immortality, matter and spirit, presence and absence, the quotidian and the mythic, the grounded and transcendent. In recent years she has developed an immediately recognisable visual language, her images simple, stark, symbolic – grounded, silent, still, poised.

Nic Bladen has become known for his extraordinary botanical sculptures which celebrate the subtle and diverse beauty of the plants that grace his native Western Cape, South Africa - the heart of the Cape Floral Kingdom, the smallest yet richest of the world's six floral kingdoms. Bladen has pioneered a way of developing perfect castings of organic matter to preserve or fossilize plants and flowers. Using the ancient lost wax method, Bladen makes molds from organic material, and then transforms these into unique sculptures of entire plants.

Bladen's first solo exhibition, Peninsula, at Everard Read Gallery Cape Town in 2013, focused on the richness of botanical diversity that surrounds the artist's Simons Town studio, which is situated within the heart of the Cape Floral Kingdom, the smallest yet richest of the world's six floral kingdoms. For this show, concessions from landowners on the peninsula enabled Bladen to harvest several rare species.

In 2015, Bladen worked as Artist in Residence at Tswalu Kalahari, a private nature reserve in South Africa's Northern Cape Province. The sculptures that he created during this time - a depiction of iconic, beautiful and strange Kalahari desert plants and trees - formed his second solo exhibition: Kalahari: a season at Tswalu, at Everard Read Johannesburg in October 2015.

A 2017 collection of work was shown at Everard Read Johannesburg depicting the tenacity of Cape plants to flower, despite the harsh conditions endured during the current drought.

Bladen's unique works can be found in the Standard Bank, Ellerman House and Oppenheimer collections in South Africa, as well as in many other private collections around the world.

Guy Ferrer (b. 1955, Algeria) Born in Algeria, Guy Ferrer is a French artist of Catalan and Italian descent. Over the past three decades, Ferrer has developed an international reputation as a painter and sculptor, with exhibitions in museums and galleries around the world. Recent honours include a monumental bronze for the French embassy in Singapore, a large fresco painted for the French embassy in Bakou, Azerbaijan and a triptych titled Liberté-Egalité-Fraternité commissioned by the OECD and for its headquarters in Paris. Angus Taylor (b.1970 Pretoria, South Africa) is a South African sculptor known for his powerful, often monumental, sculptural works made from materials from his immediate environment - Belfast granite, red Jasper and the orange earth found near Johannesburg. Although he references traditional South African crafting techniques, his works are unmistakably contemporary. Taylor’s craftsmanship, bold and visionary approach and his original use of materials has resulted in many ambitious public and private commissions around the world.

Two decades ago Taylor founded Dionysus Sculpture Works (DSW) where he honed his molding and casting proficiencies to become a master craftsman. DSW’s skills in modelling, mold-making and casting has made it a much sought-after foundry and, in addition to Taylor’s own projects, the foundry casts for many other leading artists, including Norman Catherine, Sam Nhlengethwa and Deborah Bell. Through his foundry, he employs, trains and nurtures a staff of almost 40 and also finds time to develop the talent of younger artists.

In 2017 Taylor was awarded the prestigious Helgaard Steyn Award for his notable contribution to South African sculpture. His work can be found in many private and public collections in Africa, Europe, North America and Australia.