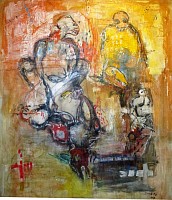 His later paintings have been described as depicting ‘a world of ghosts’ – as well as the transformations that humans, animals and organic forms undergo through interaction with their environment. His hybrid beings – somewhere between human and animal, the living and the dead – engage in dance and evoke rituals and games around status and gender that are deeply rooted in Benin culture. Pregnant and fertile women also occur frequently, through which the artist explores themes of desire, reproduction, abortion or expectancy.

Overall, his broad oeuvre draws from the aesthetic currents of the past, underscoring the unresolved tensions arising from the fusion of Catholicism, Animism and indigenous traditions with contemporary culture – and these themes are often explored in the spirit of irony and satire.

Dominique Zinkpè was born in 1969 in Cotonou in the Republic of Benin. He is one of the most celebrated contemporary artists to emerge from his country. His strongly personal style and versatility as a painter and sculptor have secured him increasing international recognition.

Not much was known of Zinkpè until 1993 when he won the Prix Jeune Talent Africain (Young African Talent) Award at the Grapholie in Abidjan. More recognition came in 2002 at the Dakar Biennale when he received the West African Economic and Monetory Union (UEMOA) Prize for his installation Malgie Tout! (In Spite of Everything!).

Dominique Zinkpè has participated in numerous exhibitions, workshops and residencies in Africa, Europe and South America.