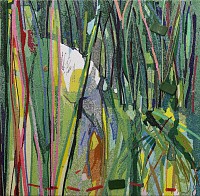 Through her artworks, Liza Grobler explores the dialogue between inner and outer landscape. Her  installations create dialogues with the spaces in which they are displayed and explore the connections between people, artworks and the world around us. The viewer is encouraged to travel with her into an imaginary world where fact and fiction becomes one. In this world, everything is in flux and anything is possible.  The objects, images and installations are constructed through collaboration, interaction and exchange. Gallery exhibitions, projects and interventions are integrated components that cross-reference one another.

Under patronage of Spier in partnership with Yellowwoods Art.

2003
I can't see the wood for the trees, so I'm taking a line for a very long walk, João Ferreira Gallery, Cape Town

2012
From Mooi Uitsig to Mooiuitsig: an Artventure, commissioned by Lien Botha for Hangklip Art Week

2005
Groeisel no. 2, a crocheting performance and installation at the Aardklop Arts Festival, curated by Abrie Fourie, Potchefstroom, South Africa

2008 – 2013
Lecturer/coordinator for Representation 1, Architecture, Planning and the Built Environment, University of Cape Town

2014
'Blindfolded Line, Dancing Through Time', a limited edition book on the work of Liza Grobler with contributions by Amanda Botha, Andrew Lamprecht and Jeanetta Blignaut