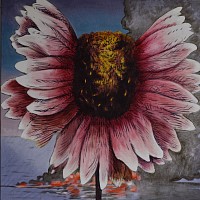 In 2015, Matthew Hindley had a solo exhibition at the Everard Read, Cape Town. In the wake of the fires that consumed the mountain above the city, Hindley had been drawn to the ruined, scorched landscapes and had started painting them. He then did a work featuring the fire itself and immediately a new subject was revealed to him: not the consequences of the conflagration but the conflagration itself, that luminous moment of blossoming before the transition became apparent. Many of his images came from popular sources and social media – several from images people took on their cell phones and posted on Instagram.

Following this show, he did a series of dry points with David Krut that featured fires and explosions – images of destruction sourced predominantly from films and the internet. He has carried the graphic mark-making he adopted in these images into his new series of large-scale paintings, so that the new works become more stylised and more overt as representations of fires and explosions rather than naturalistic images of these events. He uses highly transparent Shminka oil paints that he uses almost like watercolours, building layers and creating an extraordinary luminosity in the images. Hindley also seems to be occupying a middle-space here between photography (the sources are usually photographs), graphic images, painting and drawing. He states he has been drawn to Goya and Van Gogh – and the capacity of the line, or the movement of the line, to carry emotion, vibrate with feeling.

Through images of war on television and Hollywood action films, we have grown accustomed to seeing explosions. They are often beautiful, spectacular. We consume such images often, perhaps daily. In this latest body of work, Hindley slows these events right down and asks us to contemplate them more closely. The images often become abstracted, morphing into suggestions of other images – with baggy minsters in the billowing clouds.

We are aware that these are paintings, representations, and are compelled to consider how we reflect on or respond to violent events. Each event is given a particular emphasis, like a sunset that can never be repeated. Each event is specific, defined – and yet as timeless as a sunset too, suggesting that war and destruction have followed the progress of humanity across time and space – and that our moment of transcendence might be glorious, memorable, worthy or representation, but the danger is always that we will leave little but a charred wasteland in our wake.

As one of the countries' most recognized younger painters, Hindley’s intense, poetic and delving artworks have featured in various critical and seminal South African exhibitions. Recent solo presentations have included An Everlasting Once at Brundyn + Gonsalves, Cape Town (2011) and Twilight of the Idols at Biksady, Budapest (2013).  Hindley’s exhibition of drawings at David Krut Cape Town coincided with the official launch of the book, The Five Magic Pebbles & Other Stories. His new solo painting presentation Resurrection (Der Brennende Wald ) was held at Everard Read Cape Town gallery, also in Cape Town in October 2015.

In addition, he has presented at the world renowned Eli and Edythe Broad Museum, Michigan (2012) and the Kochi Muziris Biennale, India (2012). In 2014, he worked on a series of paintings inspired by the mythological African tales of South African writer Don Mattera, for a book published by Rhodeworks, in Berlin, Germany. In 2015, his artwork will be part of the  imago mundi, Benetton Collection at the Venice Biennale, and his major public sculpture Speak Naturally and Continuously will undergo conservation, in order to have the delicate physical computing piece in permanent running order. The artwork is installed above the entrance of the South African National Gallery in Cape Town, South Africa.

North Carolina / Traveling to the Beijing Biennale, China in 2015