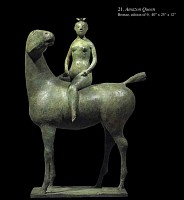 Olivia Musgrave was born in Dublin in 1958, her father was Irish and her mother is Greek. She lives and works in London and Suffolk.

Large works are usually in an edition of 3 and smaller pieces in editions of 9. A selection of sculptures are held in the gallery and her studio which can be viewed by appointment. Other pieces would have to be cast to order, a process which takes approximately 6 weeks.

The gallery has published a book in hard and softback editions, please contact the gallery for details

A short film about Olivia is available to view: http://filmstudiolondon.com/movies/musgrave/

Her father is Irish and mother Greek. She studied sculpture at the City & Guilds of London under Allan Sly. Her work is drawn both from life and from the imagination where she draws inspiration from Greek mythology. In artistic terms, Musgrave has been influenced by 20th Century Italian sculptors, including Marini, Martini, Greco and Manzu. Alongside her personal work, she has completed a number of portrait and public commissions in bronze. She is a member of both the Royal Society of British Sculptors and the Society of Portrait Sculptors.

The Discerning Eye, The Mall Galleries

The Discerning Eye, The Mall Galleries