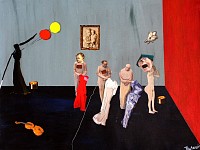 Teresa Kutala Firmino was born in Pomfret, a remote town in the North West province of South Africa where ex-Angolan soldiers who fought with South African forces in the South African Border War (1966-1989) were relocated to after the war. Her father later joined the South African Defense force which resulted in Firmino spending her school years in Zeerust and Johannesburg before she went to the University of Witwatersrand where she obtained a Masters Degree in Fine Arts in 2018. Firmino’s present narrative is contained in a broader theme that enquires into history. “History as presented is often biased and one-sided, so to get a better understanding I reimagine my past in this so-called truth.” Personal memories and historical events are combined and presented in interior scenes that present themselves as both possibilities and invitations to reimagine history. Firmino is also part of KutalaChopeto, a collective with fellow artist Helena Uambembe which they use as a vehicle to challenge and change some of the stereotypes presented in existing history narratives.

Masters in Fine Arts –University of the Witwatersrand

2016 Unisa School of Arts Conference. The History we are told not to Speak (The history of the Pomfret community)

2016 Black Portraitures iii. The Untold Story of the Pomfret Community.

2017 The Centre of the less good idea season 1. Arts on Main, Johannesburg.

2018 Now and then. Trent gallery, Pretoria

The war at home