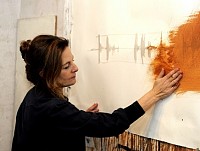 During her Fine Arts degree at Wits, Thea Soggot had the opportunity to be taught by several well-known artists , notably  Paul Stopforth, Neels Coetzee and Judith Mason. In that time, she was awarded the Henri Lidchi prize for drawing. Soggot held her first exhibition at The Market Gallery in 1981 and, in 1984, had her first solo exhibition at the Goodman Gallery where she continued to exhibit her work over the next fifteen years.

While working as an art director and designer, she began holding art classes at Femma Gavin’s studio, working on commissions, and continuing her art practice. In the early 1990s, she held art classes at the Johannesburg Art Gallery and was on the advisory board of the Market Gallery, headed by David Goldblatt. In 1992, Soggot spent eight months as artist-in-residence at the Cité Internationale des Arts in Paris. Since then, she has taken up three residencies at the Cité for shorter periods. She started to exhibit her work internationally in 1996, and began her art school, teaching drawing and painting in the same year.

In 2007 she began to exhibit with the Everard Read Gallery, with whom she continues to show.

“The novelist Chaim Potok put the words into the mouth of one of his characters in The Gift of Asher Lev: “…art begins…when someone interprets, when someone sees the world through his own eyes. Art happens when what is seen becomes mixed with the inside of the person who is seeing it.” Soggot’s art draws from within her, and it retains a sense of beauty and accessibility in the conventional sense of the term. It’s about love and physicality, it’s about torsion and complexities, but ultimately, it is work that draws you, as the viewer, in, because of its humanity. Its focus is on the undistorted human form in all its emotive perfection. It engages with the kind of universals you find in Shakespeare’s love sonnets or in the heroic values in ancient Greek sculpture. For all of these reasons, it must touch the realm of truism but remain moored in an understanding of being unfashionable – or perhaps of being fashionable.

Soggot’s work is rendered authentic by virtue of the sheer draughtsmanship that informs it. Like the Venetian painters in Renaissance Italy, she creates her drawings not with line, but with tone: swathes of mud from Retief’s Farm in the Magaliesberg become descriptive of the skin but also, muscles, blood, veins and basically, the soul that animates a given form. These forms are made real with an astute, a guttural tenderness. This is not an oxymoron. The work is irrevocably moving, not for the environmental reasons, or because her medium is difficult to apply, to fix, to work with, but because it is so basic as an element.

Soggots earth paintings bypass the more fashionable socio-political and conceptual genres. Her work harks back to a modernist age, not least of all in its refusal to release easy interpretation. Contemporary interventions frequently provide obvious, if metaphorical, pegs on which the critic is able to hang his/her wordy analyses. Little effort is required to extrapolate from the visual to the verbal. But Soggot prefers to work with visual means alone, leaving the act of translation to her viewers. Soggot says that the body is the key to her art. It is the means by which she explores certain veracities that remain out of reach of conventional discourse.

Soggot’s formal grammar is a spare, terse language deliberately circumscribed by minimal means. She uses a monochromatic palette to indicate the body – only the ochres and reds of the Magaliesberg earth framed by the black pigment of the ground or the white of the paper. That is all. Just the body and space.

Her bodies are often shown as partial forms -only a headless back, or a torso on the white void of the paper, or a head poised on a neck whose arch is achingly beautiful. It is in this very hint of muscular contraction that an empathetic link is created between the image and the viewer.”

2011    Horse, Everard Read and CIRCA, Johannesburg