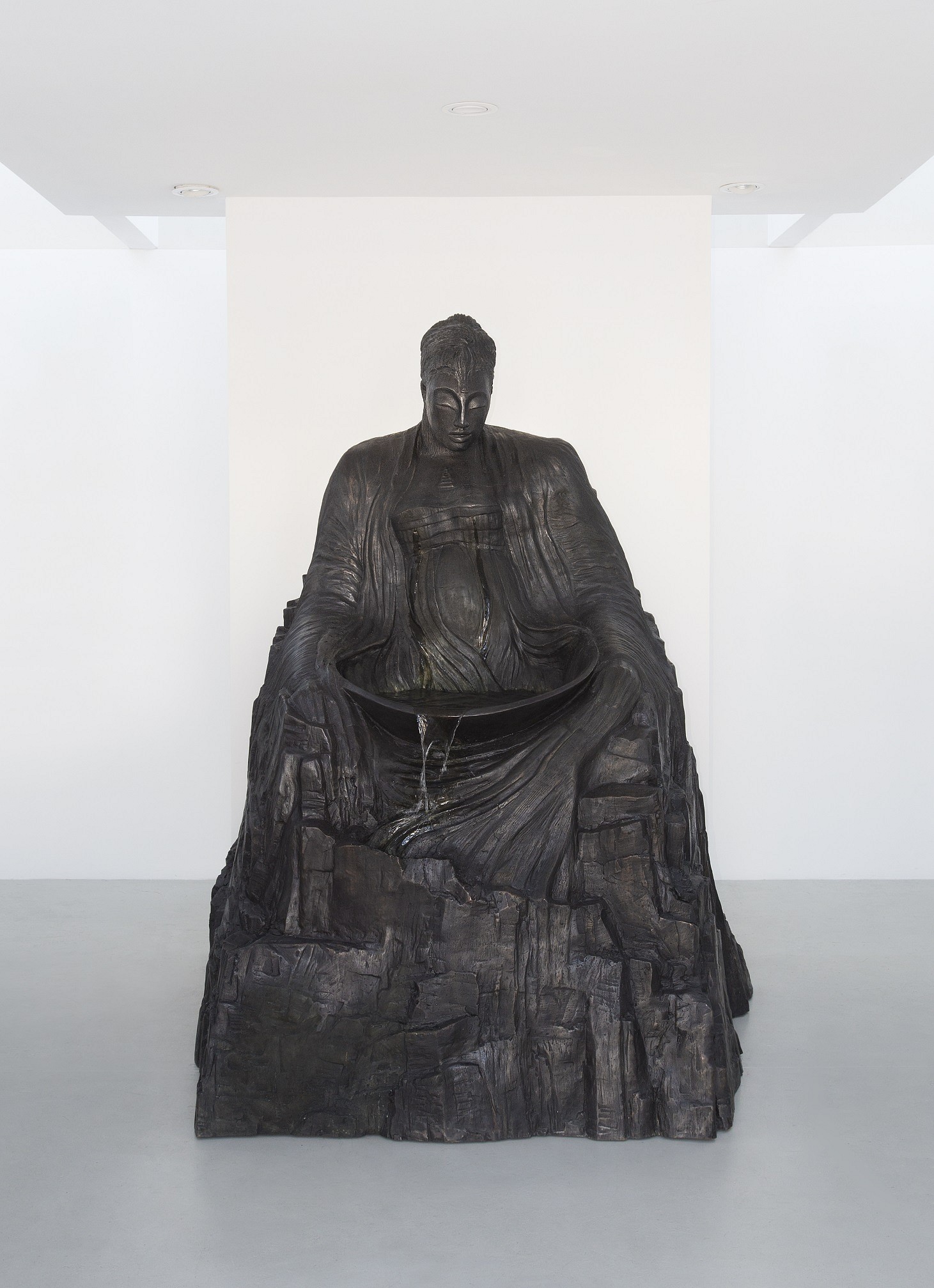 In much the same way as no movie made from a novel is referred to in the blurb as a “forgettable little feature”, or “an absolute dog” - always a “major motion picture” - the word “exhibition” is usually partnered with the word “important” in art world publicity materials.

This time it’s appropriate.  CO-RESPONDENCES is an important exhibition. And this for several reasons. First, it marks the first showing of a major sculptural work in an explicitly public register - the kind of work that in a different age and space might have been favoured with an unveiling to the citizenry - in Deborah Bell’s Debre (Forgiveness). Well over life-size in scale and equally monumental in its conception, the sculpture is of an archetypal female figure anthropomorphically conjured as growing out of, or perhaps into, the form of a mountain: the very prototype then of great mother mythological trope - saved however from overburdening earnestness by the sheer artistic skill Bell manifests in a rippling and liquid linear tracery improbably dancing across the represented drapery. The sculpture, and this is true of all of Bell’s best works, is possessed of a profoundly spiritual decorum.

Secondly this exhibition is important because it marks a collaborative – or more properly co-curatorial venture - by two artists of more than considerable standing and tenure. Over the last couple of decades – as her work has increasingly moved into the realms of spirit and the figurations of mythology – Bell’s position has come to be consolidated in the top rank of South Africa’s living artists.

Burnett’s persona, over the decades has been of a different order: first teaching art under the late Bill Ainslie at the Johannesburg Art Foundation, then segueing into curation with the game changing Tributaries show, and art dealing with the latterly defunct Newtown Galleries – and throughout, functioning as a public intellectual of note and substance, while continuing, himself, to interrogate the forms and the possibilities in Modernist abstraction. He currently runs a private teaching studio.

As teacher, curator, gallerist, dealer, cultural interventionist and fund administrator, as public intellectual, as critic – and as painter himself – he has never deviated from an overriding concern with abstract and formal values in art and a conviction that art opens into zones of feeling and experience that transcend the limits of our everyday experience, leading instead into states of grace not unlike those experienced by religious ecstatics; in a word, into the realms of the numinous.

For Burnett, the decades have led him to stylistic asceticism. After a recent series of black paintings in which he invested memories and traceries of Francesco Goya in an agitated impasto overwhelmingly black, the works in the current exhibition are studiously devoid of representational, symbolic or associative content, and predominantly white in colour, with only the occasional minimal tinting… metallic silver, nicotine coloured yellow… troubling the muteness of the colour that is, properly, not a colour, but the way light is processed before it is refracted and bounced at different frequencies into different colours. In Burnett’s paintings, it becomes a material bed of mute nothingness – an absence. By the same token, the working of the paint on the regimentally segmented canvas, the slash of a palette knife, or an accumulation of impasto comes to carry and define presence. But here too there is a conceptual puzzlement: while the effects of these strokes and marks of making change the surface, they are so fleeting and minimal in affect they change according to angle and, relatively dramatically, according to the momentary effects of light and you are never really looking at the same painting you were looking at a moment ago…

Put differently, the work exists only in transacting with it, as a meditational continuum, a whiff of something on the other side of the membrane enclosing our experience of the world.

Burnett’s most recent work is then a culmination, but it is also a kind of Zen map to those zones of numinous… where you might also find figures like his co-exhibitor Deborah Bell’s near namesake, Debre.