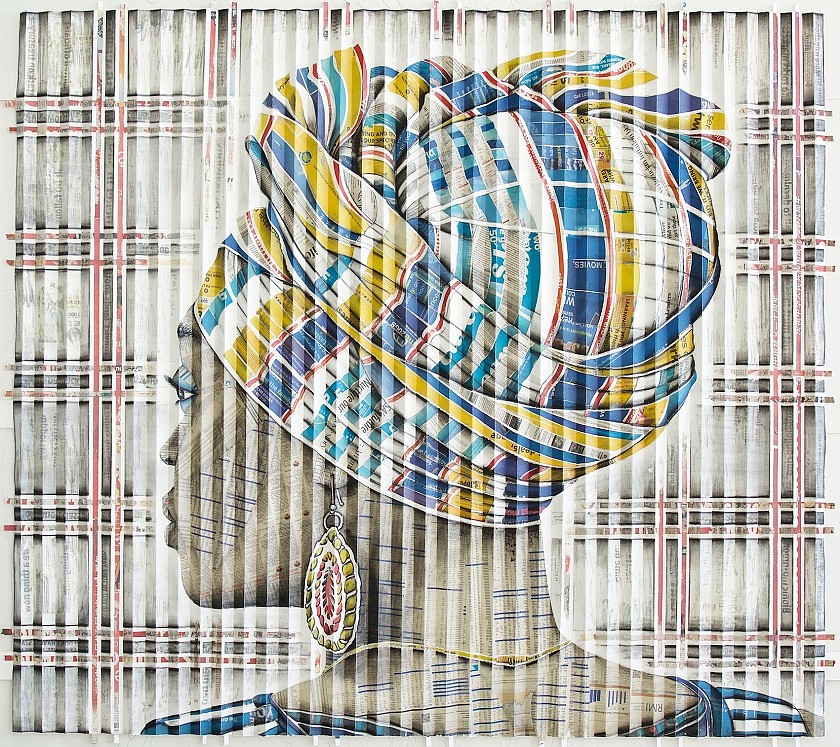 Blessing Ngobeni was born in 1985 in a small rural town of Tzaneen in Limpopo. At the age of ten, he moved to Johannesburg where, after a tumultuous decade, he entered the contemporary art scene. Bringing with him a unique style and a critique of political regimes, Ngobeni made the corruption, incompetence and duplicity of current South African ruling elite the subjects of his art. He tackled the disconcerting consequences of betraying democratic ideals, the failure to learn from historical tragedies and the expanding gap between the rich and poor. This critique is informed by Ngobeni’s own experience, the hardships and challenges he had to confront as a child and adolescent.

In 2011, Ngobeni received the Reinhold Cassirer Award which afforded him a three-month residency at the Bag Factory in Fordsburg, Johannesburg. During his residency, he interacted with veteran artists David Koloane, Patrick Mautloa and Sam Nhlengethwa who further motivated his aspirations of pursuing art seriously. He also benefitted from visiting international artists; one outcome being the Emergency Exit exhibition, for which he collaborated with Nigerian artist Omega Udemba in 2012.

The following year he was a recipient of the Impact Award from the Arts and Culture Trust and was listed as one of the Mail & Guardian’s 200 Young South Africans. At this point, Ngobeni was on the rise, not only was his name circulating within the local art scene but he began entering the international arena through artist residencies. In 2015 he attended a two-month residency at the Headlands Centre for Art in San Francisco and in 2016 he was the only artist from Africa among several international artists selected for the Cleveland Foundation’s Creative Fusion Program. He also took up another residency in New York and shortly afterwards, and visited France to attend a graffiti workshop called Grafikama in 2016.

Although Ngobeni has been exhibiting his artworks since 2007, his visibility in the contemporary art scene took effect in 2012 when he joined Gallery MoMo, which facilitated his participation in noteworthy local and international projects. Some of his exhibitions during this time were In His State of Madness (2014) and As If You Care (2015). His subsequent move to the Everard Read Gallery at the end of 2015 accelerated Ngobeni’s art career. His notable exhibitions since 2015 have been The Song of the Chicotte (2016), Masked Reality (2017), Enemy of Foe (2018) and A Note From Error (2018) in Johannesburg, Cape Town and London. Ngobeni enjoys regular appearances at the FNB Joburg Art Fair and Investec Cape Town Art Fair. His artworks have been also featured at the EXPO Chicago (2017 and 2018) and PULSE Miami Beach (2018) in the United States.

Filled with bold colour, god-like figures and suggestive fruits, Lady Skollie’s work revolves around themes of gender, sex and the politics of lust, as well as her musings on identity.

Nelson Makamo is a Johannesburg based artist. He was born in 1982, in a town called Modimolle, in South Africa's Limpopo province. Born with an astounding artistic aptitude he honed his craft at Artist Proof Studios in Johannesburg where he studied print making for 3 years.

Nelson's work is strongly influenced by the candid innocents of children. He is particularly drawn to children in rural South Africa, he believes that they embody the peace and harmony we all strive for in life, the search for eternal joy lies in the child within us all, we are just so consumed with worldly things that we forget the simplicity of life through a child's perspective. As he evolved his scope of experience so did his medium of expression, namely charcoal, acrylic, water colours, mono-types, silk screen and oil paintings

Born on the Mexican border town of Yuma, Arizona, Gary Stephens studied painting and drawing at the University of Arizona and the San Francsico Art Instiutue. For the past thirty years, he has worked as an artist and travelled extensively in Latin America, Asia, Europe and Africa for inspiration. In 1998, he moved to Florence, Italy, where he lived and worked for ten years refining his drawing style. In 2009, he did a yearlong residency at Greatmore Studios in Cape Town. Since 2008, Stephens has been living and working in South Africa – where his work began on a series of monumental portraits of his artist friends and their African sense of style and dress. He combines his interests in optical effects, stripes, fractured images, with his love of pattern and mark-making and uses the portrait and cityscape to explore both his visual interests and to engage with the beauty of the African continent. Stephens’ work is in public and private collections in the US, Europe and the Middle East.

Monumental in scale, Gary Stephens portraits pay homage to the African traditions of hair-braiding, hats, headscarves and contemporary urban style. The drawings capturing a view from behind, focus on the iconic power of a subject’s hair or hat instead of their specific facial features. Stephens portrays women in head scarves or men wearing caps to focus attention on the power of these “everyday” symbols of African life. He documents the sense of style and attention people put into how present themselves in a contemporary African setting. From a visual perspective, he is constantly drawn to patterns and visual rhythms, such as geometric repetitions, textile patterns, or botanical shapes. He is attracted to non-verbal, hypnotic visual experiences and chooses his subjects for their stripes and textures. He creates patterns underneath the images that randomly break though and energize the image.

Lionel Smit was born in 1982 in Pretoria, South Africa and is best known for his contemporary portraiture executed through monumental canvases and sculptures. Perhaps more than anything else, Lionel Smit’s art is defined by a deeply rooted symbiotic relationship between sculpture and painting.

Each of Lionel Smit’s works offers us an entry point into the variety and richness that lies beneath every face we encounter in life, whether applied in bronze or in paint. The blending of techniques across genres is a display of Smit’s work in multiple media, all bearing visible overlap.

His paintings start with abstract lines and swaths of colour that establish a base for the subsequently overlaid image of a face or bust – in most cases posed by anonymous models from the Cape Malay community. For Smit, the Cape Malay woman epitomises hybrid identity within a South African context, and reflects the disintegrating construction of identity within our increasingly globalised world. His work is loaded with both historical and aesthetic precedent; clearly focused on the dialogue between the figurative and expressive abstract. Smit thus translates his own understanding of identity - drawing from images in his daily surrounds.

Smit’s subject matter is consistent. The people he paints or sculpts possess a particular quality that appeals to his visual sensitivity, but nothing more in the way of social influence. The sitter’s face acts, quite simply, as a vessel for Smit’s experimentation with colour, stroke and technique. In regards to bronze, Smit’s treatment of the medium reveals it to be especially well suited to the translation of his painterly activities into sculpture.