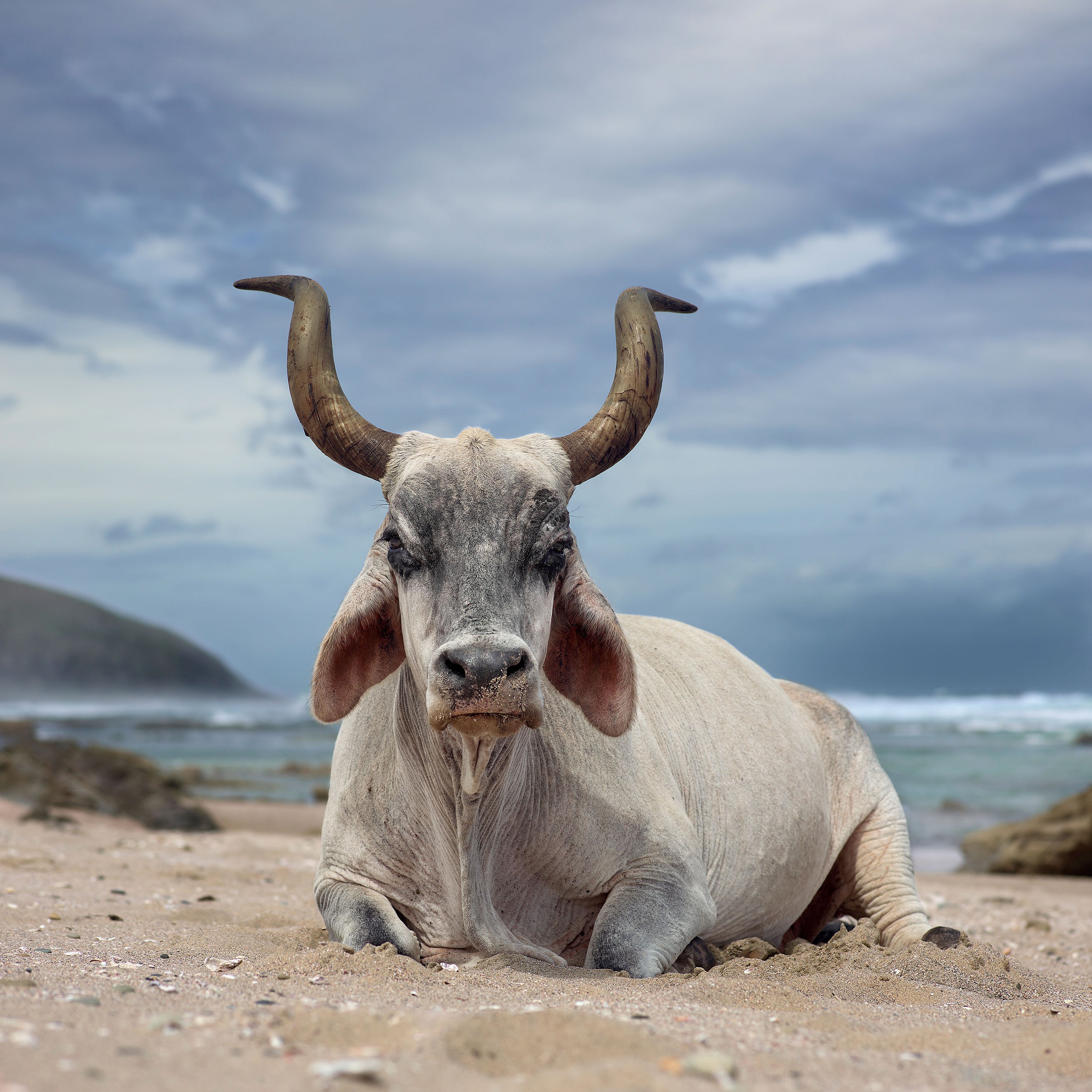 As if meeting us from the sea, patiently awaiting our arrival, we encounter them. Mythical. Majestic. These beasts seem to occupy a space and time that is beyond our conception.

The creatures we encounter in this series by Daniel Naudé are forceful reminders of our complex relationship with the animal world. Over a period of ten years, Naudé travelled to the beaches of the Wild Coast to photograph the indigenous cattle that live on these shores.

This was a process that called for patience, with Naudé scouting the area, waiting for a particular animal to be in just the right place at the right time. The release of the camera’s shutter would signal that moment when Naudé would, after careful consideration, transform animal into image. As with his previous work, a delicate stillness permeates this photographic encounter. The weather and the effect of light on the landscape, as well as the temperament and composure of the animal, would all be taken into account. Only if he finds these variables to be in perfect balance would Naudé take a photograph. As he explains:

It is important to approach the landscape and the animal with an open mind. I many ways, it comes down to the process of exploration. I have learned to be receptive and slowly immerse myself in my working environment. I always try to find the balance between mindfulness and abandonment that comes from being in nature. To me, it is a moment of stillness, a place where I am able to rest with the landscape and the animal.

On the Wild Coast of South Africa cattle have left an indelible mark on the history of the region. It is here, after all, that Nongqawuse had her fated encounter with the spirits of her Xhosa ancestors in 1856. The importation of Friesland bulls from the Netherlands by white settlers, and the subsequent spread of bovine lung disease, lead to the decimation of local cattle. When Nongqawuse had a vision in which her ancestors promised retribution and restoration, it seemed as if some radical turnaround in the diminishing livelihood of the Xhosa people was possible. According to legend, the ancestors foretold that the dead of the Xhosa nation would rise from the sea, bringing with them new, uncontaminated cattle. This, the ancestors promised, would happen on the condition that the Xhosa people slaughter all their cattle and destroy their crops. After a year of systematic destruction, the Xhosa was left waiting on the shores of sea, hoping on a return that never came to pass. This event marked the demise of the precolonial Xhosa nation, with an estimated 40 000 people dying of starvation.

Against this complex relationship between human, animal and ocean, Naudé engages with the highly emotive relationship between human and animal – a theme that is embodied in much of his work to date. The wonder of his photographic practice lies in his ability to set up an intimate visual encounter between human viewer and animal subject. For Naudé, there is a vibrant energy that comes from that moment when he connects with an animal through the lens of his camera. And it is this exact moment of mutual recognition that he wishes to share with the viewer. As he maintains:

While I am working, I always have the viewer in mind and think about how they might respond to the range of emotions that the cattle display. There are certain expressions in cattle, as there are in other animals too, that tell you whether they are tense or calm, curious or angry. They have an emotional presence that you have to understand and negotiate. I am interested in those moments when animals look into the lens of the camera and you can actually sense their individual expressions. Some may be tender and dreamy, while others will confront you with a direct stare that is challenging and aggressive.

Such considerations are also influenced by the landscape within which Naudé encounters the animal. In his words:

The landscape serves as a means to ground my work in a specific place, while it also serves as a reminder of the enigmatic nature of the cattle I am photographing. The landscape also contributes to the emotional tonality of the photographs. One starts reading the cattle as that which emanates from the landscape, while they also seem to be moving landscapes in themselves. You can actually visualise the animal through the landscape, and vice versa. Both leave their mark on one another. The animal is made and morphed by the environment in which it dwells – you cannot read the animal and the landscape as separate entities.

Appearing on the beach with the ocean in a hazily background, we meet the animals usually staring directly at us. Over time, Naudé’s perspective on an animal has shifted from a side-profile view (which we saw in Animal Farm) to a frontal viewpoint. This was deliberately done, he explains, in order to “create the effect of looking at something that is reminiscent of the outline of the human figure. I wanted to evoke that feeling that one is meeting, face-to-face, some extraordinary creature, part human and part animal, that has just emerged from the sea”. In this way, Naudé ensures that his own telling of the story of the cattle does not relinquish that sense of mystery that pervades their existence.

It is exactly this fascination with the enigmatic nature of animals that draws Naudé, again and again, to his subject matter. “Why the animal?”, I asked him during a conversation about his latest body of work. And he explained:

Simply put, the animal is unpretentious. Animals do not pose, they merely exist. We attach meaning to animals, we read them as the carriers of our stories. And yet our own existence depends on them and we cannot live without them. How we see animals are more telling of ourselves than of them. On a personal level, when I meet them and see them through my viewfinder, something happens that gives me a better idea of my own existence. It adds substance to my understanding of what it means to exist. It helps me.

That, I would argue, is exactly the tie that binds us to history and makes the story of Nongqawuse so relevant to the contemporary moment. Never has our relationship with the natural world been in so much need of critical intervention. But as Naudé reminds us, our desire for finding some resolution to our own problems – for finding prophetic signs of change at the shores of the sea – is as old as legend.