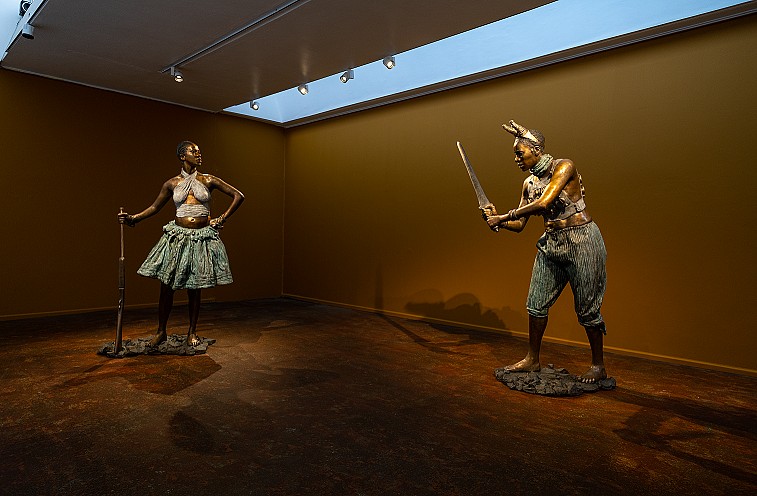 All the works I have made to date are centered on the themes of metamorphoses, memory, life and death. Ophelia and her space of loss, and how love, or the lack of it, created the delirium that eventually lead to her death. The Minotaur negotiating the maze, which is as much a trap for his victims as it is for the beast himself. Bullfighting, and how the intersection of fighting versus protecting oneself interplays.

On the border of myth and reality – the story of the Agoodjie is the same. This army of women was both feared and celebrated, and how their story has been simultaneously deleted and mythologized, form the building blocks for this exhibition.

The word Agoodjie has dual meaning: “Backbone” and “one who comes from behind”. This army of women were the core personal protection of the kings of Dahomey. They were known as ‘the last defense before the King’ and were his personal bodyguard. The multiple stories of the Agoodjie acknowledge them as a strong army of warriors with regiments and ranks, fighting on the forefront and simultaneously pretending to be helpless women and catching or killing their enemies unexpectedly.

The origin of the Agoodjie dates back to the 1700’s. The then King, Akaba unexpectedly died of smallpox in the arms of his twin sister Hangbe, during the war against the kingdom of Wemenou in 1715-1716.  Akaba’s heir was too young to take over the throne, let alone assist with fighting the war, and it is said that Hangbe made the decision to take the role of her late brother and lead the troops. She is said to have dressed as Akaba and acted so convincingly like him that nobody suspected that she was not the King himself. The Dahomey army won this war at it was later discovered that Hangbe had impersonated her brother. She then was next in line for the kingship and was recognized as both King and the Queen of the royal court simultaneously; A position which was highly contested by her younger brothers and other males in the community. This mistrust resulted in Hangbe making the decision to mobilize a female bodyguard for herself, rather than relying on the men that had previously been assigned to guard the reigning King. This was the beginning of the Agoodjie.

Queen Hangbe had a three-year rule but was eventually unseated by her younger brother Agaja, who erased her story from history because he believed only men should be able to hold the throne. The story of Queen Hangbe, almost erased from official Dahomey history, lived on through her mighty female soldiers. They were symbolically recognized as ‘wives’ of the king and ‘mothers’ of the community although they mostly didn’t marry or reproduce. Oral and written accounts show that these women served as royal bodyguards to the Kings and were later incorporated into the army by King Ghezo, who ruled from 1818 to 1858. The war songs sung by the Agoodjie were incorporated into the military songs of the time and, in contemporary times, are still sung by the police and the army of Benin Republic.

The recognition of the Agoodjie as official soldiers of Dahomey strengthened the duality that was already embedded in the society through the kingdom's religion of Vodun. Within the belief system of Vodun, in all institutions, political, religious and military, men would have a female equivalent. It is believed that the divine Creator Mawu is a fundamentally female being that embodies a duality of both male - Lisa and female - Mawu. Lisa is the sun god who brings the day and the heat, as well as strength and energy. Mawu, the moon goddess, provides the cool of the night, peace, fertility, and rain. Mawu and Lisa cannot exist without each other, and it is believed that ‘When Lisa punishes, Mawu forgives.’

This duality underpins how the sacred and the secret continue to be negotiated. The belief in the sacred path of reincarnation is fraught with lots of secrecy within parts of how Vodun is practiced in modern day Benin Republic. Many aspects of this practice are openly spoken about and practiced while others are shared with a select few behind very tightly-shut doors. Collective memory, and how certain narratives are passed on, creates a blurred intersection of history, religion and mythology. Meeting the modern-day reincarnation of Queen Hangbe was a step into the realm of the scared, whilst experiencing the masquerade of Zangbeto, took me one foot in the space of the sacred and the other firmly in the secret.

Zangbeto is the guardian of the night. He comes out to protect communities and shows no mercy to enemies and wrongdoers. Although he is seen as a protector, he is simultaneously a destroyer. Young children and women fear him, as it is believed that even a glimpse of him could cause blindness, death or miscarriage. Both feared and respected the Zangbeto is a spiritual incarnation of the female and male army that was once tasked with protecting Dahomey. The act of confronting a shape and form that I have been unconsciously trying to comprehend through the mediums of drawing, painting, sculpture and printmaking seems to have brought me full-circle and opened a new avenue of discovery.

Through the act of recreating the attire worn by the Agoodjie, travelling to Benin Republic, and more specifically to the Royal Palaces of Abomey, engaging with both modern day historians and custodians of this history, my intention was to excavate a portion of the past. By occupying their spaces and embodying these women, I created a fiction based on a complex history. Like the zebra that has its own distinct patterning but can merge and camouflage into the rest of the herd to conceal and disguise itself, I transform and reincarnate over and over – becoming a symbol of living many lives.